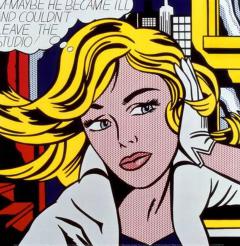 Roy Lichtenstein (American, 1923–1997) was a leading figure of the Pop Art movement, creating a variety of paintings and sculptures in a signature, comic book aesthetic. He worked from images in newspaper ads and comic strips, appropriating both their subject matter and style, developing a technique that mimicked the screen-printed Ben-Day dots used in print media. One his most famous works, Drowning Girl (1963), features an image from the DC Comic Secret Love #83, and depicts a crying woman as she is covered by waves, accompanied by the melodramatic caption: “I don’t care! I’d rather sink—than call Brad for help!”

Born in New York, NY, Lichtenstein attended the Art Students League during his teenage years before enrolling at Ohio State University to study art. In 1943, Lichtenstein was drafted into the army, serving for three years before returning to school. In 1949 he received an MFA, and continued to teach and paint in Ohio for several years. His early 1950s works, painted in a European Modernist style, frequently depict uniquely “American” subjects, including scenes of western expansion and an adaptation of Emanuel Gottlieb Leutze’s famous Washington Crossing the Delaware (1871).

In the 1960s, Lichtenstein moved to New Jersey to teach at Rutgers University, and began his iconic comic strip works, which marked a distinct break with his previous aesthetic. Lichtenstein was motivated to create works that no one would want to hang on the walls, later commenting, “The one thing everyone hated was commercial art; apparently they didn’t hate that enough, either.” A solo show of such works at the Leo Castelli Gallery in 1962 garnered him critical acclaim and notoriety in the art world. His work continued to incorporate pop culture themes, displaying static images of figures, brushstrokes, landscapes, mirrors, reflections, and other subject matter in an ironic style. His later works feature close examinations of illusionism and the representation of reality in art. A very prolific, celebrated, and sought-after artist, Lichtenstein created many public sculptures during his lifetime, and his work has been the subject of many retrospectives around the world. He died in New York City in 1997, at 74 years old.