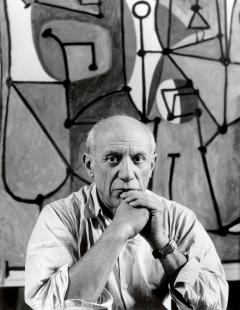 Pablo Picasso was one of the most famous and influential artists of the 20th century. His contributions to the history of Modern Art—namely Cubism, the movement he developed with Georges Braque—as well as his ingenious use of form, color, and perspective, influenced countless artists, including Willem de Kooning and David Hockney. “There are artists who transform the sun into a yellow spot, but there are others who, thanks to their art and intelligence, transform a yellow spot into the sun,” he once said. Born Pablo Diego José Francisco de Paula Juan Nepomuceno Crispín Crispiniano María de los Remedios de la Santísima Trinidad Ruiz Picasso on October 25, 1881 in Málaga, Spain, he showed prodigious artistic talent at an early age. First studying under his father the painter Jose Ruíz Blasco, Picasso went on to attend the Royal Academy of San Fernando in Madrid before travelling to Barcelona and finally Paris, where he settled in 1904. His early career rapidly transitioned from Neo-Impressionist studies, through the Blue and Rose periods, and reached a culmination in his proto-Cubist masterpiece Les Demoiselles d’Avignon (1907). Constantly in search of creative innovation he culled visual influences from African sculptures, the works of El Greco and Henri Rousseau, as well as children’s artwork. Picasso was not limited to painting, and found ever new ways of expressing himself through collage, sculpture, and ceramics. Deeply affected by the violence of the Spanish Civil War, Picasso created what is arguably his greatest and most overtly political work with Guernica (1937), a mural-sized painting depicting the horrors of war in contrasting grayscale. The artist died on April 8, 1973 in Mougins, France. Today, his works are held in the collections of the Metropolitan Museum of Art in New York, the Tate Gallery in London, the Hermitage Museum in St. Petersburg, as well as institutions devoted solely to his life and work which include the Museo Picasso Málaga, the Museu Picasso in Barcelona, and the Musée National Picasso in Paris.